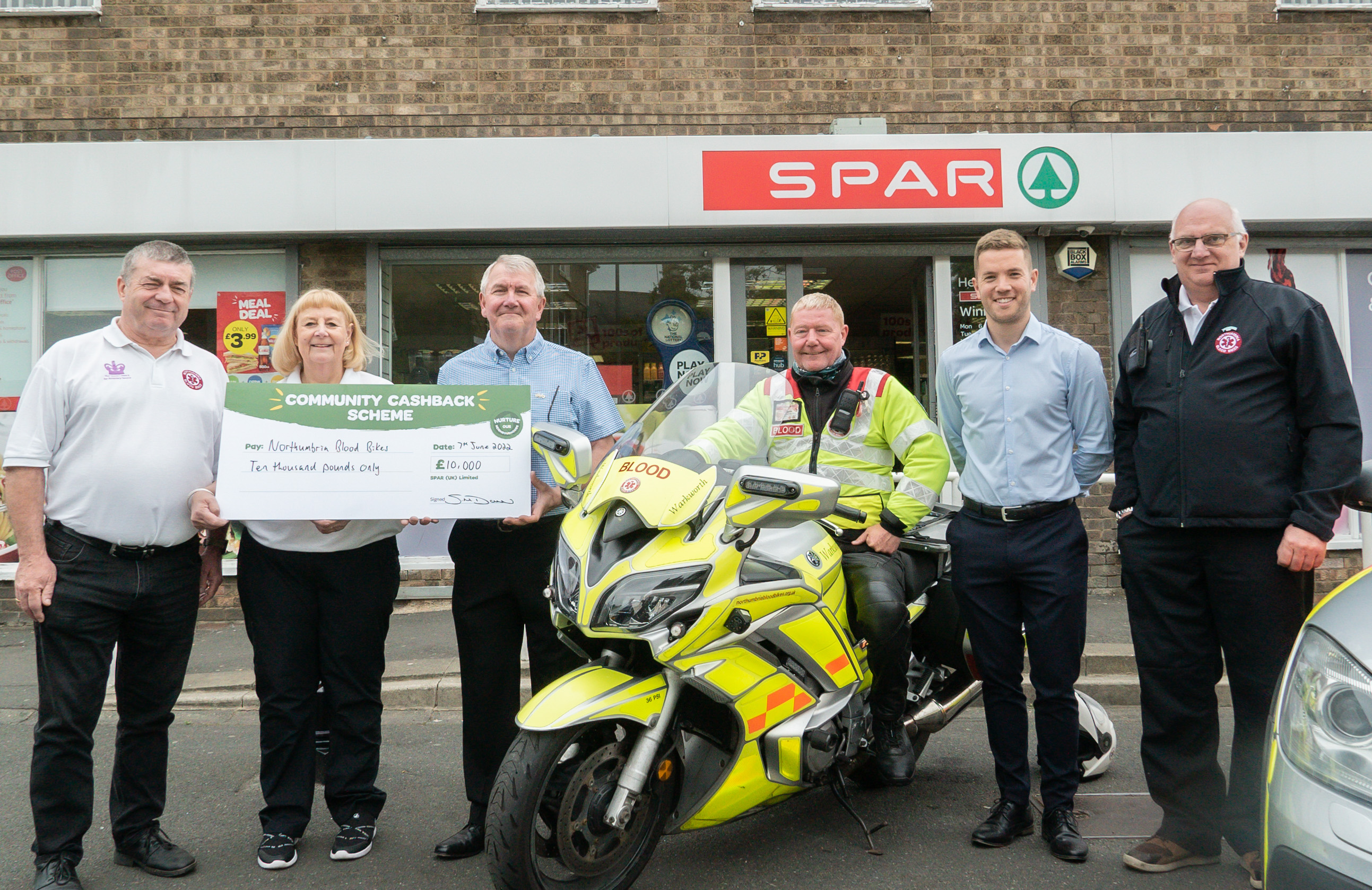 The voluntary organisation provides a vital out of hours transportation service to the NHS and applied for the SPAR UK Community Cashback initiative after seeing it on social media.

Northumbria Blood Bikes transport anything from blood to baby milk and equipment through to medication across the entire North East area, and in 2017 the organisation won the Queen’s Award for Voluntary Service.

Since being founded in 2012 and going live operationally in 2014, the organisation has grown from one motorbike that was passed from rider to rider each shift, to a current fleet of 13 motorbikes and six cars, with over 300 members that carry out 13,000 jobs annually.

Volunteers also provide a ‘Blood on Board’ replacement service to both of the Great North Air Ambulance helicopters 365 days of the year in conjunction with partners at Cumbria Blood Bikes.

Launched in April, the Community Cashback initiative offered 30 grant prizes through SPAR stores across the UK with the aim of providing funding to local voluntary or community organisations and charities who need it most.

In the North of England alone, there were almost 1,300 applications for funding, with just six prizes available for the region ranging from £10,000 down to £1,000.

Mick Redpath, Vice Chair of Northumbria Blood Bikes, said: “It is a marvellous feeling to receive the Community Cashback grand prize from SPAR UK. This will enable us to continue to urgently move anything the NHS require us to do from hospitals, blood transfusion centres, care homes and doctors’ surgeries.

“We operate across a huge area from Berwick on the Scottish border down to Darlington, and from Haltwhistle in the west over to Sunderland in the east, and so to receive a prize like this through a community initiative makes us feel very special.”

Carolyn English, Fundraiser for Northumbria Blood Bikes, said: “I never in a million years thought we were going to win the grand prize. I still smile about the phone call I took as I was speechless. I thought it was a hoax and wanted an email to back it up!

“We’re always looking for funds and have really suffered through the pandemic for fundraising opportunities. It is absolutely amazing to receive £10,000 through SPAR where I am a regular shopper.”

The cheque presentation was made to the Northumbria Blood Bikes by independent SPAR retailer Graham Grant outside his store in Winlaton alongside Tom Murphy, Marketing Manager at James Hall & Co. Ltd, SPAR UK’s primary wholesaler and distributor for Northern England.

Tom Murphy said: “SPAR believes in nurturing our neighbourhoods and supporting the communities we serve. One way we are helping to do this is by giving back to local organisations through our Community Cashback scheme.

“Northumbria Blood Bikes immediately jumped out as a deserving local voluntary organisation on our long list of applicants from the North of England. Having met members of the team and learned more about the great work they do, I’m delighted that we have been able to add some extra financial help to this wonderful cause.”

Five other organisations have received grant funding through the Community Cashback initiative across the North of England through SPAR UK’s primary wholesaler and distributor for the region – James Hall & Co. Ltd.

You can find out more about James Hall & Co. Ltd at www.jameshall.co.uk.